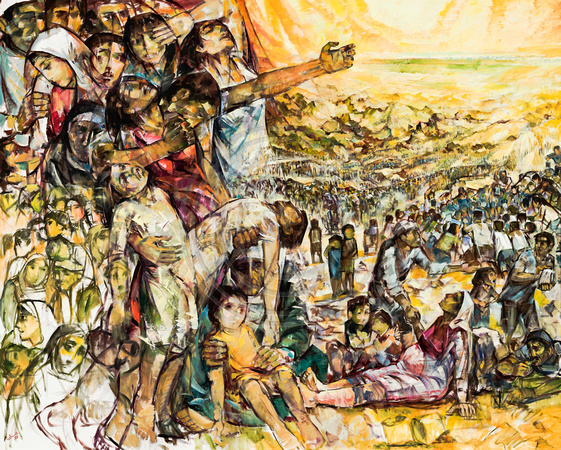 THE ROAD TO NOWHERE

Encircled by violent, abusive gangs, were forced to march towards the east through rough, arid, dusty mountainous terrain, until we reached Arab controlled territory. The heat and thirst were an agony. Many old people and children died from exhaustion and thirst, and in the confusion and panic many children were lost and separated from their families.

Detailed Story:
At the eastern corner of the city, while bidding farewell to the last of Lydda’s homes, the children’s cries of thirst in the hot weather were on the increase. My young brother Tawfiq (2 years old), and my two young sisters were among those who were thirsty.

We were in the month of Ramadan and the people, including my father and mother, were fasting. While walking with my family I noticed an orange orchard near to us. Among the roaming groups of people – and without the armed Jews noticing – I reached a pool of water in the orchard. I was able to fill a container which I found near the pool. Quickly, tens of people followed me towards the same place. At the same moment that I wanted to return to my group, carrying the water for my brothers and sisters, a military Jeep suddenly arrived- stopping a few steps away from me. A Zionist officer stepped down carrying a pistol in his hand which he pointed to my head, and then ordered me in bad Arabic: “Throw water … Throw water”. So I did what he ordered and returned to my brother and sisters without water, then we resumed walking …

At sunset of that day, we reached a point in the midst of these rugged mountains where we could no more see any of the armed Jews. We realized that we were in areas that were not under their control.

Exhaustion and thirst was having an effect on us. The march was not going smoothly because of the inability of the aged, the ill and the children to continue. We found some abandoned wells and natural openings in between the rocks where there was impure residual water. We drank the water like horses and some of us began looking for a container or a rope – or what may do as a rope – in order to obtain water. Hundreds of people crowded the place in order to get a sip of those wells and to wet their lips …

The children were exhausted from the heat just as flowers that wilt of thirst. Their faces were somber, dusty and blackened while their lips appeared white because of the intense thirst.
As the weather became more hot there was chaos among the people.
Thirst and exhaustion had become worse and many people lost their concentration; so, many children were lost and the elderly, the sick and the pregnant fell to the ground – and became as though corpses without movement.

I was one of those able to find a place among those crowded around one of the wells. I tried to get water, along with tens of people like me.
After several attempts I and my brother were able to get some of the impure water that was in those wells. I kept as much as I could of the remainder and held it in my wet shirt, and I proceeded to run towards my family.
A thirsty woman begging for a sip of water attacked me. When she saw my wet shirt she held on to the edges of the shirt in order to suck it and to get the water that remained on it. Some pulled out the roots of the plants in search of any liquid present in them.
After sunset, we were among the first to arrive at “Na’lin” village in the sub – district of Ramallah. The people of the village, with their natural generosity, straight away tried to save us by offering water and bread, and some animals to transport the handicapped, the sick and the pregnant. At that night we slept under the olive trees on the ground and under the sky’s cover.
FununArts
User Agreement
Cancel
Continue