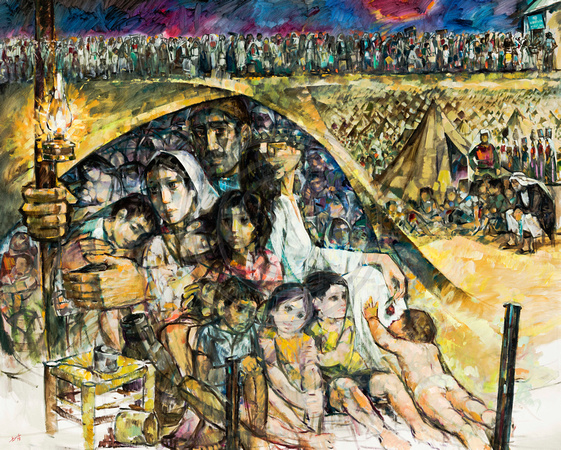 Out of Lydda to Ramallah, Bethlehem, Hebron, then to Khan-Younis near Gaza and a refugee camp surrounded by barbed wire. International charity trickled in ….The proud Palestinians of yesterday – today’s refugees – learnt to queue in long lines to receive hand-outs: meager food ration to ease the hunger pangs of their children.

Detailed Story:
On the following day we were transported by truck from the village of Na’lin to Ramallah. They left us at a girl’s school to the south of the city. We were crowded in the rooms of the school and we were given bread and we drank until satiated.

The health condition of my younger brother Tawfiq deteriorated as a result of thirst, heat and severe sun strokes on the day of forced immigration (he was 2 years old). After a few days he passed away. My father, his two brothers as well as other relatives decided to depart to Khan Yunis in the middle of Gaza.
We thought that getting to Khan Yunis will only take a few hours and that the passage to it is easy. In fact, we experienced a dangerous and strenuous journey as a result of the Zionists controlling some of the roads.
After about two weeks we arrived at Khan Yunis. We were among the first refugees to reside in the first camp to be established at Khan Yunis- at the upper point of “Sawafi”. The camp rested on the white, pure and golden sands which change in form and color as a result of sunlight by day, and the moonlight by night. However, the beauty of those hills of sand did not last for long. In effect, some men and machines proceeded to level those hills so as to make them suited for thousands of coming refugees.
FununArts
User Agreement
Cancel
Continue