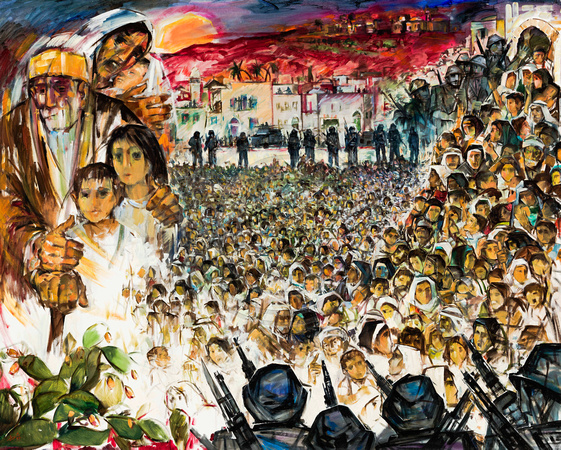 On the morning of 13 July, 1948, we were forced out of our ancestral homes in Lydda at gunpoint. Zionist gangs rounded us up and herded us into the city’s largest squares. Then, surrounded by a tight cordon of heavily armed Zionist gangs, we were driven relentlessly towards the east.

Deatiled Story:
Friday the 9th of July, 1948 Lydda and Ramleh was captured by Zionist Gangs. After only three days we awoke to the pandemonium of people rushing fearfully to the road parallel to home. Within moments, members of the Zionist Gangs hit the door of our house with their rifle butts and asked all who were in the house to leave …

It was not possible to procrastinate or not to follow those military orders. And so we walked in groups in the direction of an open space in the town carrying the name of “Nawa’ir Plaza”.

Tens of thousands of women, children and elderly were driven, with just the clothes that were on them, to open spaces inside the cities of Lydda and Ramleh. These people were either inhabitants of these cities or who were refugees from Jaffa and the villages of the sub-districts of the region. The cries of the children were heard as well as the moaning of the sick and elderly. The atmosphere was becoming hotter and more depressing and fearful.

The gathered people were surrounded by armed men and by Zionist military vehicles whereas a large number of snipers were present on the rooftops of surrounding houses carefully and anxiously watching the process of uprooting and forced migration.
Nobody knew what will happen to us. Many thought that the process will not be different from similar operations carried out by the British Mandated authority in the majority of the cities and villages of Palestine, when people were asked to leave their homes and gather in the city or village Plaza for a limited number of hours during which time the British soldiers searched the houses looking for arms and rebels; at the end of the day, people were permitted to return to their houses. People did not return to their houses because the operation this time was of a different nature. Instead of the thousands of people being allowed to return to their homes (assembled by force) they were ordered to walk towards the east through some of the plundered city streets and the ransacked shops. It was becoming hot and thirst and fear were on the increase. We were walking eastwards while being surrounded by armed Jewish Zionists exclaiming lewd and humiliating words at us. We did not realize that that was the beginning of our journey of displacement.
FununArts
User Agreement
Cancel
Continue