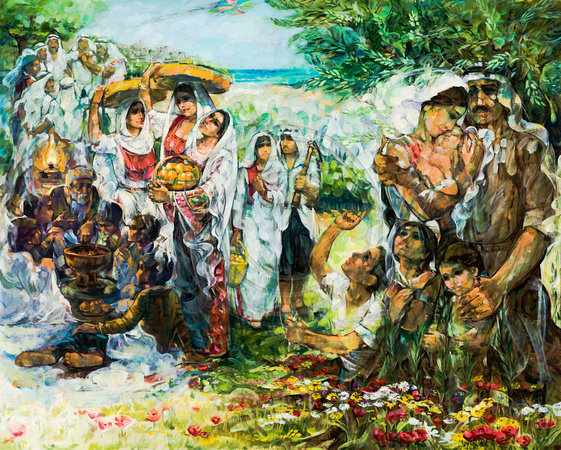 THE SPRING THAT WAS

Life in Palestine during the British Mandate was marked by trouble and upheaval. There were continuous revolt, uprising, and national outcries against the British-Zionist plot to take over the country. Yet, Palestine in my memory is a glorious spring full of color, abundance, grace, and happiness.

Detailed Story:
I was born in Lydda in the year of 1930. I lived in an area surrounded by orange and lemon orchards, and also by green gardens of vines. The surrounding plains are extended and wide open, adorned by flowers of varied forms and colors, such as narcissus, daisy, red anemone and many, many more.. . Adorned plains with plentiful flowers of varied colors and shapes and on a base of graded green.

Seasons involve the festive and traditional; and the winter has semi-sacred rituals. In the evening we used to bring some burning coal to fill the brazier with charcoal. After evening prayer we – the children – would gather around the brazier awaiting our grandfather or grandmother, the father or mother, in order to roast chestnuts or sweet potatoes. In the meantime we would listen to an old story … and “Once upon a time”..

The agenda of the Jaffa, Lydda and Ramleh region was full of feasts and religious and popular festivals, held yearly at their designated time. These events were a source of great happiness to us where there was the tune, the movement and the color. Most prominent among these events was the “Rubin” festival to the south of Jaffa; that of the “Prophet Saleh” at Ramleh; that of the “Prophet Job” on Jaffa’s coastline; the “Prophet Moses” festival between Jerusalem and Jericho; and, finally, the “Lydda feast” at Lydda. Likewise, there were seasons for celebration in spring and summer when the families, young and old – would go out to spend a day at the banks of the valley or in proximity to the wheat – threshing fields or under the shadow of the olive trees – eating and drinking, singing and dancing, playing, racing and just enjoying themselves.
FununArts
User Agreement
Cancel
Continue