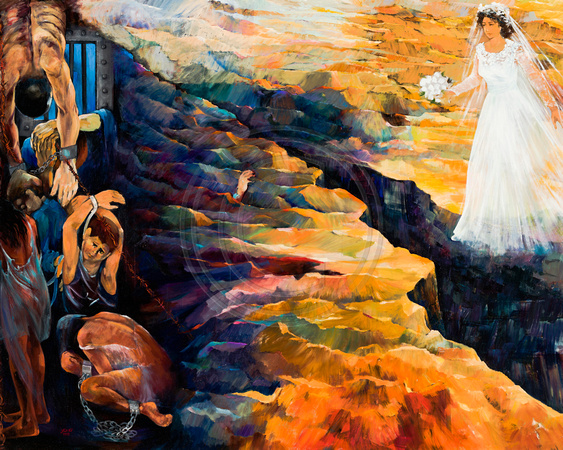 The Israeli occupation divided cities, towns and villages. Families were separated … and brides were unable to cross over the divide to join their bridegrooms.
Palestinians in enemy prisons were tortured.

Detailed Story:
In the wake of the establishment of the Israeli entity in 1948 the bulldozers of the enemy began its criminal undertaking by erasing from existence tens of Arab, Palestinian villages. In the process, five hundred towns and villages were destroyed. Among the bizarre and painful incidents caused by the Israeli forces was the occupation of a portion of a village or a region and so separating the same families. For example, this applied to the town of Bayt Safafa, near to the city of Bethlehem. A portion of this town was occupied and another portion remained a part of Arab – controlled territories until 1967. Despite this, people on both sides of the town would march together on their sad and happy occasions even though barbed wire and the enemy’s barriers separated them.

After the 1967 disaster, the Zionist occupier conquered the remainder of Palestine. The tragedy of Bayt Safafa became applicable to the occupied Syria Golan and to Southern Lebanon.

The Arab Syrians of the Golan would observe both sad and happy occasions in the same way that the people of Bayt Safafa did. This was despite the despicable conditions of occupation. Sometimes, the bride would be from the occupied area and the groom from the free area, and at other times, the opposite. Oh! Just how many incidents occurred separating the newly
weds .. !
FununArts
User Agreement
Cancel
Continue