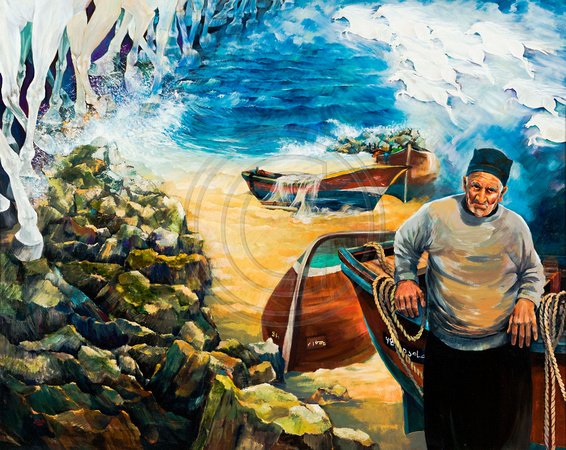 STEADFAST AS A ROCK

The sea is generous and life-sustaining, but not when a cruel enemy bars fishermen from the freedom of the sea from seeking their legitimate and age-old livelihood. But the knight is coming … from the land … from the sea … from the sky … he is coming.

Detailed Story:
Uncle Saber of Jaffa was full of energy and vigor before the Zionist gangs destroyed his dreams and ambitions by making him and his compatriots a refugee from the home which he inherited from his forefathers in Jaffa. In effect, he found himself a refugee in one of the refugee camps, close to the shore in the Gaza district.

He inherited from his father and grandfather a love for the sea and for the Arabic dish “fatta”. He became enamored by the sea, engaging in sometimes bitter, at others sweet adventure. The best of the sea was at Jaffa: bountiful and sincere. After becoming a refugee he worked as a fisherman with a sailor in Gaza, and so regained some of his vigor and sense of existence. He got married and was blessed with a son and two daughters. The son grew older and learned from his father the profession of the forefathers.

In 1967, the Israeli occupation encompassed all of Palestine. The Gaza then, became subject to the Israeli military occupation. New unjust laws were applied regarding fishing and fishermen. Uncle Saber was not free any more in dealing with the sea. Fishing presently required permits and designated times etc.

The son of uncle Saber joined the Palestine movement against the Israeli occupation. The son was martyred and the afflicted father continued to work in order to secure for himself and his wife their daily bread.

However, entering the sea became different with the advent of the Israeli occupation..

“It is prohibited to fish except with the consent of Israeli occupation authorities..”

“It is prohibited to fish except in a boat with specific colors .. and a specific size”

“It is prohibited to fish unless wearing colored clothes, specifically for fishermen ..”

“It is prohibited to fish except in ‘so and so’ months ..”

“It is prohibited to fish unless of ‘such and such‘ an age ..”

And uncle Saber endures and endures pondering and dreaming of the day when he will regain the intimate connection that he had with the sea.
FununArts
User Agreement
Cancel
Continue