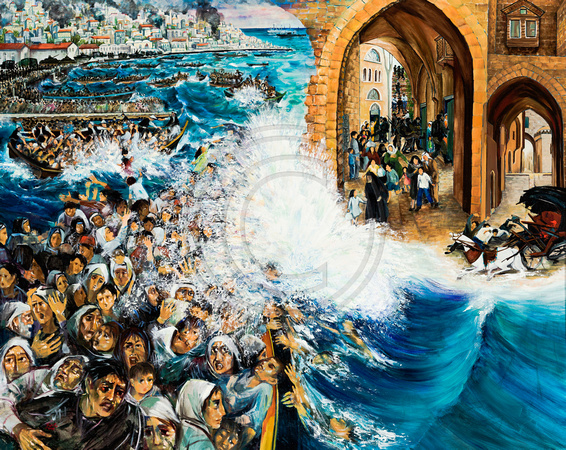 At dawn on 28 April, 1948, armed Zionists over-ran Jaffa, and forced the townspeople out of their homes at gunpoint. The terrorized citizens were forced into boats and driven out to sea pursued by a hail of Israeli bombs and bullets.

Detailed Story:
Man across history has known all types of crime, and experienced various kinds of oppression, injustice, tyranny and servitude, but I could not, and cannot, imagine that there is a crime more vicious, enormous and tormenting than uprooting man from his home and homeland without committing any fault. When I was a child, I remember there was no scene more difficult to me that caused my tears to run down than the scenes of uprooting and forced migration.

The people’s life in Jaffa deteriorated for a few months because of the eruption of unequal military clashes between the people of Jaffa and the conquering Jewish gangs. Life had stopped, schools and shops were closed, electricity and water cut off, and danger prevailed everywhere. During the first months of the year 1948, the sound of bullets and exploding shells continued without interruption. Nobody felt safe for himself and his family.

On the dawn of the 28th of that awful year and on the request of my uncle Rajab, we got ready to leave because of the dangerous situation. The sea, in those days, was the only way out to safety, especially after closure of the land roads and having Jaffa surrounded from all directions. At sunrise, and after the armed Zionists started to invade all old quarters of the city for the purpose of evacuating their inhabitants by force, we left our house along with large numbers of the inhabitants toward the sea.

Thousand of the people of Jaffa gathered on the piers of the port, men, women and children all panicked and traumatized while bullets of the Jewish snipers and shells fell on them and around them. Jaffa has resisted, just as any city or village in Palestine, but its resistance was not successful, and how could it be when it was against a joint force on one of which (the sun never sets). Firing intensified and the siege continued round the port until the moment of surrendering and submission to the beasts of uprooting.
Large groups had crowded the piers of the port; their cries and screams mixed with their fears forced people to jump into the boats that were there. And in the crowd, during that moment, people stamped to get on the boats; some made it to the safety of the boats, while others were less fortunate and died drowning.
We were lucky we were able to get to one of those small boats which took us to a Greek ship called Dolores waiting outside the port. Eventually, it took us to Beirut.
FununArts
User Agreement
Cancel
Continue