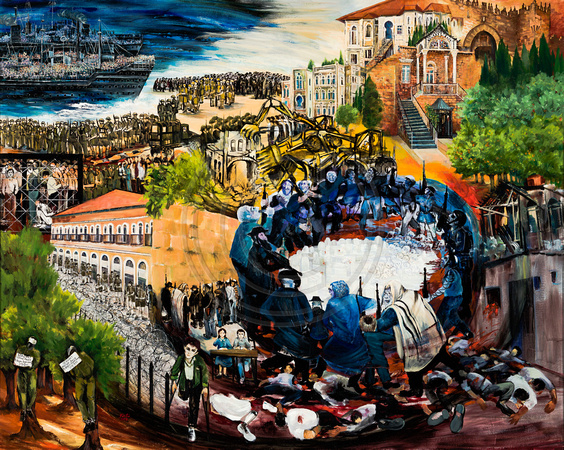 Palestine and the Palestinians are the forgotten victims of the unconscionable (criminal) conspiracy between Zionists and Britain. Jewish immigrants flooded into Palestine; Palestine land was seized; Palestinian resistance was brutally suppressed, and a racist Israeli State was established on the ruins and destruction of the Palestinian homeland.

Detailed Story:
When the interests of the colonialists and the opportunists meet, the people will always be the victims. In the beginning of the twentieth century, the European colonialists, specially the British, have discovered that their interests correspond to the aspirations of the newly-born Zionist international movement. And, so, the colonialist has sponsored and supported it , not only by promises but with all means that enable this racist movement to accomplish its goals in establishing a Jewish state on the Palestinian territory, and at the expense of the Arab people of Palestine.

Hundreds of thousands of Jews have been transferred with the direct help of the British imperialist; they came to Palestine from all parts of the world by illegal and crooked ways. The British authorities in Palestine legislate new laws that allowed the migration Zionists to settle in the land.

At the time when the British authorities were applying all kinds of oppression and repression while preventing the Palestinian people from taking any action, they were applying different standards towards the Zionist terrorist gangs, such as the Hagana, Irgun and the Stern gangs- and others- through, for instance, military training and supplying them with ammunition, equipment and limitless support.
Even though the British colonialist extended tremendous help and support , enabling the Zionists to establish their state in Palestine, he was not safe from the mischief of these terrorist gangs, as these gangs terrorized their British allies by murdering and executing hundreds of them, military as well as civilians. The Palestinian people did not stand and watch as this cheap conspiracy unfolded. They struggled with all their capabilities, and unlimited numbers of them were sacrificed as victims in order to defeat the enemy and save the nation.
FununArts
User Agreement
Cancel
Continue