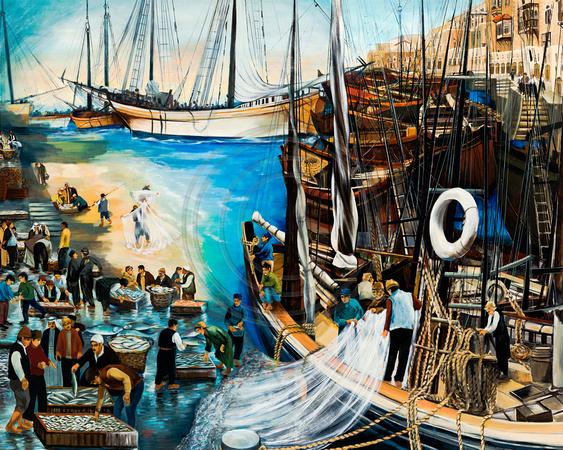 Our home was in the old City of Jaffa. Its windows framed the clear blue sea … the masts and sails of the ships in harbor intertwined with the ancient mellowed stone, arches, and domes of the old buildings to form a mosaic of color and beauty. Best of all were the evenings (afternoons), when the fishing boats returned home with their catch and the harbor teemed with life and excitement.

Those who remember the Port of Jaffa, the “Bride of the Sea”, also undoubtedly remember its brave sailors and their striking attire.
And because Jaffa lies in the middle of the Eastern Coast of the Mediterranean it has been influenced by both Egypt and the lands of Syria.

During the British Mandate period, the British decided to make Tel Aviv the foremost port. Therefore, the Port of Jaffa (considered among the oldest of Mediterranean Ports) was not permitted to expand and develop. Thus, ships would anchor at a distance from the port pavement attending large cargo boats pulled by launch boats and that would depart very full of orange boxes and return with all kinds of cargo.

One of our sources of enjoyment was to go out and play at the beach.
In fact, the sea left traces on me that will not disappear. Our house, in which I passed my childhood, and which was the family’s inheritance – was one of the houses of the old quarter. This house had a distinguished and traditional architecture – it overlooked the small streets of the old city and its measured sections. The windows and the window facades overlooked the sea and the port.

Like all ports in the world the port of Jaffa was a meeting place for peoples from around the world – Arab, Italian, Greek and French. Those communities were pleased to live in Jaffa and eventually became a part of the Palestinian people without being subject to discrimination .
You would see them in their times of leisure seated at tables on the pavement of the port and in the many restaurants at the seaside eating of the bounties of the land and sea and smoking the Narjileh and speaking the language of the sea. The merchants and restaurant owners would race to buy the fish from the fishing boats docked;.. and all would get what is apportioned .
FununArts
User Agreement
Cancel
Continue