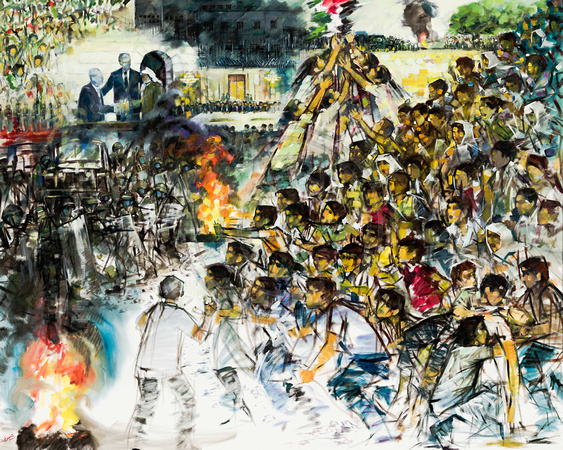 A period of shock, grief, and paralysis followed the Israeli invasion and occupation of Lebanon in 1982 and the massacre of Palestinian refugees in Sabra and Shatila refugee camps. But in 1987, the despair and anger erupted and “stone-throwing children” confronted fearlessly the might and savagery of the Israeli occupation. Hundreds of children were maimed, blinded, suffered broken bones and were killed… Then came the Madrid Conference … the Oslo Conference…Conference after conference…

Detailed Story:
I felt, as everyone did, a sense of deep grief for the disappointment of the Palestinian people in the wake of the dispersal of the PLO in 1982, with its leadership and its political, cultural and military cadres. I sensed the need of people for renewed hope. I began to deeply ponder what could happen later.
Memories were aroused. After the 1967 catastrophe, and in the wake of the occupation of the West Bank and the Gaza strip, in addition to the occupation of the Egyptian Sinai in its entirety, as well as the Syrian Golan heights, many thought that the occupation will not last for long, since the Israeli occupation of Sinai and the Gaza in 1956 only lasted for a few months.

In the early 70s, people realized that the occupation will neither go nor perish except through resistance. Thus, some sporadic and popular resistance against the occupying enemy was started. Stones were used in this resistance.
In 1984, I produced two portraits. The first portrayed children in one of the popular quarters preparing an ambush against an Israeli patrol with stones in their hands. I named the painting “The Stones Children”. In the second painting I portrayed students of a school hurling stones at an Israeli military patrol after leaving their school. I called this painting “The Dheisheh Children”.
(Dheisheh is the name of a refugee camp close to the City of Bethlehem).
This was three years before the outbreak of the Intifada toward the end of 1987. The world bore witness that the Intifada is a new form of courageous and popular Palestinian resistance against the occupation. Thus, hope returned to the Palestinian individual.

Towards the end of the 80s and the beginning of the 70s- about two years after the beginning of the Intifada – changes and events, at the Arab and international levels, come one after the other. The Soviet Union and the states within its orbit came to an end. Likewise, the Arab solidarity that existed – came to an end with the advent of the Gulf crisis which began in 1990 through the Iraqi occupation of Kuwait. The Madrid Conference was convened and was followed by the Oslo negotiations and agreement, the Cairo agreement, then Taba, Sharm Al-Sheikh, Al-Khalil and “Camp David 2”. The Palestinian National Authority was established over some Palestinian state in the West Bank and Gaza providing that Jerusalem is its Capital.
FununArts
User Agreement
Cancel
Continue