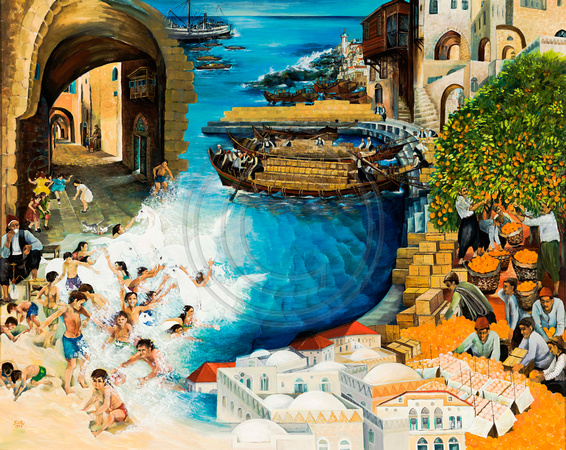 JAFFA – BRIDE OF THE SEA

Jaffa, bride of the sea … one of the oldest and most beautiful cities on the Mediterranean. The Canaanites called it “Yafi” meaning beautiful. Jaffa of the incomparably beautiful sandy beaches … Jaffa city of oranges. In season, the orange and green colors of ripe oranges on the trees filled me with joy, as did the happy rituals associated with picking and shipping the fruit across the blue Mediterranean.

Detailed Story:
It is only human for people to love their homeland. It’s an instinct that has inexorably influenced human beings. Palestine is my country and Jaffa is my place of origin and where I lived as a child. Some of my friends rightly think that Jaffa has a preferential place in my heart in relation to the other beloved Palestinian cities, I do not know whether this is attributable to my person or to the city that has enchanted me since my childhood.

Jaffa is simply beautiful. If it wasn’t so then it would not have deserved the name which the Canaanites gave- “Yafi” which means “beautiful”.
Nature bestowed on Jaffa a location of unsurpassed beauty. It lies on a height that appears to be a sign indicating a midpoint of the Eastern Coast of the Mediterranean sea-between Egypt and the land of Greater Syria. Likewise, it is an attractive lighthouse guiding those who have lost their way at sea to the venue leading to holy Jerusalem, the city of Religions.

Jaffa is as stubborn as it is beautiful. Its beauty lured conquerors by land and sea, from East & West. Many a time its walls were bombarded, its port was turned. But it has always arisen from under the rubble regaining its health and restoring its adornments; chains of snow-white orange flowers and a bouquet of green orange leafs up above its hair, which derives its color from the golden fruits known in the minds of people everywhere as “Jaffa”.
No doubt, the proximity of Tel Aviv to Jaffa – both of which touch at more than one point – was one of the most important reasons for revolutions starting there or strikes taking place. This led to Jaffa becoming a cultural, literary and journalistic capital distinguished from other Palestinian cities.

My father, “Aref Al – Akhal” was a skilled craftsman who was well known throughout Palestine as a repairer of all kinds of arms as well as machines. His workshop in the city was second only to that of the German Wagner. It was natural for him to have special relations with the rebels and their arms over decades. This led to his being arrested several times by the British Mandate Authorities.

Although the profession of my father may indicate secretiveness and harshness, the realities of our domestic, family life was quite the opposite of that – since I had two brothers, the first was a carpenter, and the second, like his brother “Maher” was skilled in repairing precision instruments – and both had an inclination for music and song. The eldest, “Rajab Al-Akhal” was a leading singer in Palestine, actually before the founding of radio stations. He has many song recordings in his name. The second, on the other hand, played more than one instrument, and especially on the ‘Ud (lute). And, so, in this home – professionally, nationally, artistically – I was brought up. Destiny then led my life.
FununArts
User Agreement
Cancel
Continue