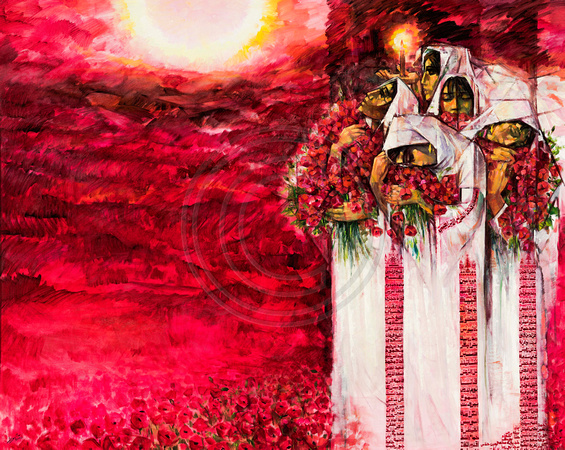 HOMAGE TO THE MARTYRS

Since childhood I have listened to tales of bravery and sacrifice of Palestinian fighters for their homeland. From the very beginning in 1948, the Israelis pursued a policy of ethnic cleansing through military action, terror, intimidation and massacres…many massacres…Deir Yassin, Kafr Kassem, Qana, and others. There were thousands of fallen martyrs….the twentieth century is spattered with their blood.

Detailed Story:
In 1982, the Israeli aggression began. Israeli forces invaded Lebanon in order to extinguish the forces of the PLO and its Lebanese allies. Because of the grave, anticipated danger we were forced to leave our house and we stayed at a house in a less dangerous area in Beirut.

The area where we lived, as well as many other areas of Beirut, were hit in an ugly manner. Many buildings were completely destroyed. Among those was a nine-storey building housing “Dar Al-Karama” at the ground floor (a gallery for the General Union of Palestinian artists). In it, there were hundreds of paintings for Palestinian and Arab artists, as well as for foreign friends- given as gifts to the Union; all of these paintings were under the rubble.

On the 14th of September, 1982 Bashir Gemayel was assassinated – the newly elected Lebanese president. And the Israeli forces invaded. These forces were still around Beirut, and then they were deployed in many areas of Beirut. They proceeded to loot, torture and arrest people.
After the PLO Palestinians left, we hardly slept. We followed the news and we would look by night at Beirut’s sky which was violated by the sound of Israeli military jets day and night – with the terrible sound that they cause as a result of the bombs, missiles and breaking of the sound barrier. We were in a state of distraction and astonishment in the face of these rapid changes. We were quietly pondering the question: “What does the morrow hold?”

On the eve of the 16th of September light bombs hurled by Israeli jets lit the sky of the region where the Palestinian refugee camps of Sabra & Shatilla are located in West Beirut. These bounds turned night into daytime. The camp was no more than a few hundred meters away from where we were, and we were wondering: “What is happening there?”
We woke up to strange, unrecognizable sounds. We rushed to the windows and balconies to clarify the matter. In front of us were group of people from the refugee camps, some of whom were barefooted, and others were in their pajamas … carrying on the shoulders their beloved ones … and aimlessly walking around without knowing their direction …
They were just walking alarmed away from something horrible going on ..
Tears filled their scared faces, and their eyes were unconsciously moving in all directions … it is just fear .. fear .. fear …

One of them informed me that a terrible massacre was happening to the inhabitants of the Sabra and Shatilla camps and that it was stilling going on.
It was not possible to get there since the Israeli forces were in control of all the capital, and so the roads were not secure.
I felt limitless grief and I likewise felt a sense of being overwhelmed as well as a sense of impotence …

It is then a new massacre to be added to the previous series of massacres inflicted by the Zionists on the Palestinian people .. Deir Yassin, Kufr Qasim, Qibya, Lydda Tantura, Khan Yunis, Bahr Al-Baqar, Samu’, the Aqsa Mosque, the Ibrahimi Mosque, Qana…