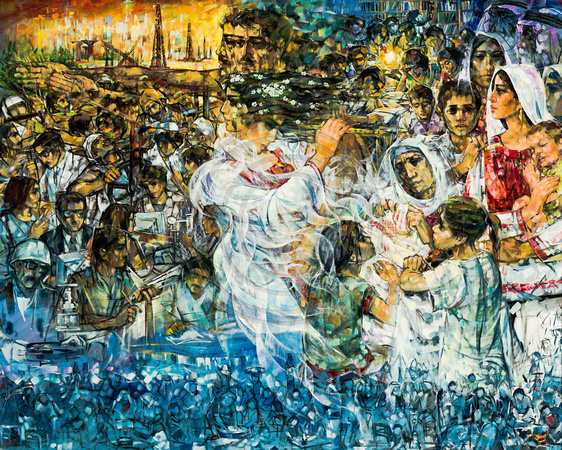 We had to affirm our existence by hard work, study, and excellence. Our young men and women sought work in Saudi Arabia, Kuwait, and other countries; at all times maintaining strong ties with their families in occupied Palestine, in the refugee camps, and in exile. At the center, stood the Palestinian mother, symbol of tenacious endurance and patience, confident of her self and of the future.

Detailed Story:
I traveled by train, towards the end of the summer of 1950, after bidding farewell to relatives and friends. My father was sad for fear that I might face hardship since he was unable to provide for my living expenses and study in Cairo.

I was accepted at the college of Fine arts, and then started looking for some kind of work. I found work in a painter’s studio, and my remuneration was a mere three pounds a month, but, the situation improved considerably after several months.

In 1953, I carried with me to Gaza what I had produced in paintings during my three – year study of fine arts at the college in Cairo, with a view to organizing an exhibition of those paintings in Gaza. The paintings’ named “Where to?” and a “Gulp of Water”, and a third one named “The beginning of the tragedy” were amongst the paintings displayed at the exhibition.

The exhibition at Gaza was a success which increased my self – confidence, and which prompted me to consider to display an exhibition of my own works in Cairo.

After much effort, it was agreed with the competent authorities in Cairo, to set up the exhibition at the hall of the officers in the “Zamalek” area, under the patronage of President Jamal Abdul Nasser.

A Palestinian girl named Tamam Al-Akhal arrived in Cairo to study fine arts by virtue of a scholarship granted to her for study at the girl’s college, an affiliate of the Lebanese charitable society (Al-Maqasid Al-Khayryah Al-Lubnaniah). I made an effort to introduce myself to her when I learnt of her desire to display some of her works at my exhibition, with a view to selling some of them and thereby improve her financial condition. My meeting with her became more frequent and a love story began which culminated in marriage, then with children and grand children.

The exhibition was opened under the patronage of President Jamal Abdul Nasser, who attended in person, accompanied by most of the members of the Egyptian Revolutionary Council as well as other important Arab and Palestinian personages, including Haj Amin Al – Husseini, Ahmed Hilmi Abdul Baqi, Ahmad Al - Shuqairi, Abdul Khaleq Hassuna, Yasser Arafat and others.
President Jamal Abdul Nasser did not talk much during the exhibition. He remained silent while intensely studying the portraits, moving from one portrait to another, surrounded by members of the Revolutionary Council, Arab and Palestinian personages, all watching in solemn silence.

When he had left the hall and I was standing next to him all the time that he had spent at the exhibition, he extended his hand to me in a handshake, pressed on my hand but did not utter a single word.

In the early fifties, many Palestinians of both sexes, as well as experts, started departing for work in Kuwait and Saudi Arabia. They endured all the hardships characteristic of the primitive life which then existed there, in order to obtain the means of livelihood for themselves as well as for their families in the refugee camps. They shared with the citizen of those countries their life of hardship, and worked with full dedication to build the pillars of life, in its multiple fields.
Communication between the parents and their sons and daughters, studying and working outside of Palestine, did not cease. But the parents, through their messages expressing intense feelings of love, affection and longing and, by their fortitude in their difficult existence at the refugee camps, and their struggle to exist, were the best means to ameliorate the pains of estrangement and, its heavy toll on their sons and daughters, and their husbands and brothers, in their struggle abroad for survival.
FununArts
User Agreement
Cancel
Continue